The very talented and beautiful Margarita Dominguez is at it again! 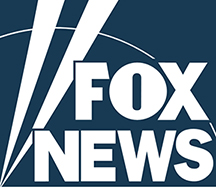 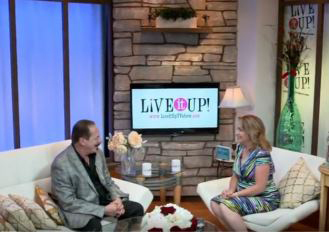 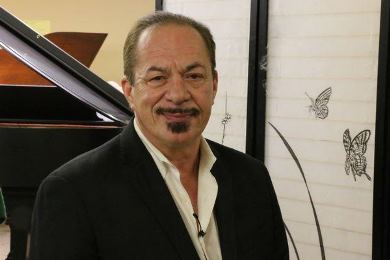 When FDNY Lt. Jim Sweeney suffered with traumatic stress after his efforts at the ruins of the World Trade Center he decided to revisit his childhood. In December 2001, Sweeney purchased a Sterling baby grand piano from Sonny's Piano Store in Bohemia NY and then took lessons from owner Sonny Stancarone. Post-9/11, he found the experience cathartic. Sweeney had played the instrument as a boy but gave it up. “I went to Sonny and not only was it a piano lesson but it was a way to work through some of those residual feelings,” Sweeney said of his emotional struggles. . [Read Full Article]

CLICK HERE to Watch our segment on FOX 5 News with Jodi Goldberg
FOX News stopped by Sonny’s Piano Warehouse recently to interview Sonny on his Piano Yoga Method and here’s what they said,“How long would you need to learn the piano? One teacher says his method will have you playing within an hour. He calls it piano yoga. I’m certainly no concert pianist but I’ve been reassured by pro player Sonny Stancarone, the owner of Sonny’s Piano Warehouse in Bohemia, Long Island, that he can teach even an amateur like me how to connect to my inner musician and be playing the piano in a matter of minutes. He calls his method piano yoga. He says it is based on relaxing and letting go. He says it’s a concept similar to meditation. The trick is you should stay relaxed and try not to think about the actual notes you’re playing. Sonny says what makes this way of learning special is there’s no right or wrong way. We started with the time-honored traditional song of “When the Saints Go Marching In.” And taking those simple musical concepts, we quickly got our groove on.” 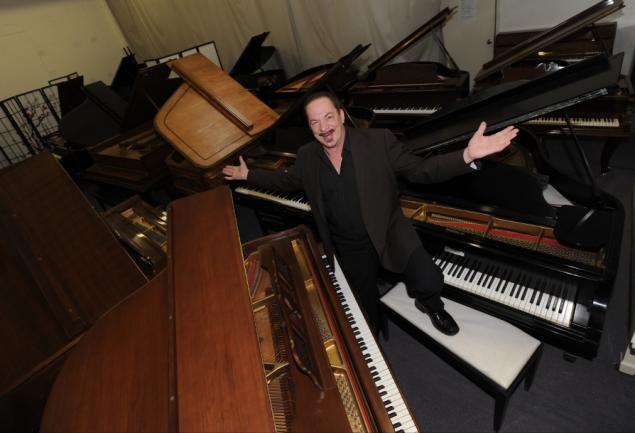 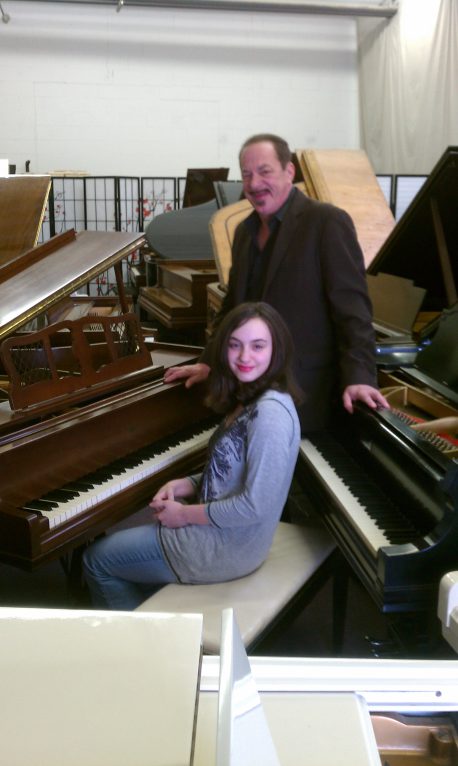 A Seneca Middle School student has entered a viral video contest in an effort to win a free piano from Sonny's Piano Warehouse in Holbrook, and she's asking for the community's support. Allison Marvelli, an 11-year-old student at Seneca, entered Sonny's annual piano giveaway contest, which is held on Sonny's Facebook page. The premise of the contest is that entrants must submit a video of themselves playing the piano in an effort to vie for the most votes. The top three vote-getters on the Facebook page will receive a free piano, courtesy of Sonny's. This is the third consecutive year that Sonny's has launched its contest. Last year the piano store also gave away three pianos to the top voted videos.[Read Full Article]

Sonny Stancarone, a Patchogue resident, ran Sonny's Pianos on Railroad Avenue in Sayville for eight years until he closed it about four years ago and opened an online Internet store. "Prices were going up on everything. The landlord and the utilities quadrupled," he said. "My formula was successful in the store so we expanded it online."[Read Full Article] 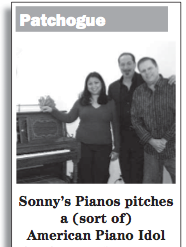 The votes are tabulated! Sonny's PianoTV "Win A Free Piano Contest" on Facebook has created an international buzz! It's the first time anyone ran a Facebook piano contest completely dependent on fan voting, similar to the many reality shows on TV networks. The difference is there were no celebrity judges and all of the votes were cast by worldwide Facebook fans. Also, all votes were cast based on popularity of the performances not just on who was the best. "The Internet and TV technologies are merging and the Internet gives you instant global access" said Sonny Stancarone, the creator of the contest and owner of SonnysPianoTV.com, an interactive all video website & TV channel that promotes piano playing for health and well being and buys and sells pianos internationally. "I couldn't be selling pianos worldwide without the Internet...[Read Full Article]

When Victor "Sonny" Stancarone was growing up in Long Island. he was always highly motivated. At 7, he wanted to learn how to play the piano and kept asking his father, an accomplished musician, to teach him. His Dad felt he was too young but Sonny persisted and kept asking over and over again until his father relented and did so. At 10, he cured his childhood asthma by practicing yoga... [Read Full Article]

Piano Man with a Heart

When Kristen, the Recreation Director of a local nursing home, had a Knabe Baby Grand Piano that was inoperable and taking up too much space, she called a number of piano dealers to remove it. Everyone wanted to charge for the service. When Kristen finally got hold of Sonny Stancarone, owner and CEO of Sonny's Piano TV Inc., an Internet company that buys and sells pianos online based in Holbrook N.Y., Sonny not only agreed to remove the piano free of charge, he also offered to replace the Knabe with a smaller upright piano and hold a free "Play Piano Instantly" Piano Yoga workshop for the nursing home patients and staff. [Read Full Article]

Have you seen what's happening on Facebook? It's history in the making! That's no hype. Facebook gets results, especially when you are innovative and run a never before seen "Win A Free Piano" contest, with the winner determined by fans around the world voting on their favorites. The Grand Prize is a Knabe Baby Grand Piano... [Read Full Article]

You Don't Have To Stand On Your Head to Do Yoga

Let's face it. We are not all star athletes; Some of us are a little more sedentary.

Yoga is sometimes associated with a series of difficult poses, but the underlying principles include learning how to breathe and relax. Proper breathing can reduce stress and improve health.The benefits of yoga and relaxed breathing techniques include improvement in symptoms from clinical depression, heart disease, arthritis, insomnia and a number of medical conditions.[Read Full Article]

A new method for learning how to play the piano through yoga principles and improvisation techniques is on the scene! Inventor Sonny Stancarone says "Now everyone can instantly play the piano and achieve health benefits at the same time." As Sonny Stancarone recently demonstrated with a reporter during an interview on TV10/55 News , anyone can sit down and instantly start making beautiful music using his unique method. People don’t have to spend years studying...[Read Full Article]

Launching the November line-up of power videos airing on LongIslandNEWS.info from November 2nd through the 8th is the renowned entrepreneur, pioneer and PianoTV Show host Sonny Dante Stancarone of SonnysPianosTV.com. Discussed on camera is Sonny's innovative, interactive all- videos-website that offers all things piano --all the time. Watch The Full Video

This is a recent television news story that featured Sonny's innovative PianoYoga Teaching method for playing piano instantly. This method incorporates the use of breathing, relaxation, stretching, and getting into the flow exercises and techniques that Sonny has developed to help everyone play piano with little or no sheet music. Watch The Full Video

By innovatively combining the technology of the Internet with the relaxation techniques of of yoga, Sonny Stancarone, who has owned Sonnys' Piano Studio on Railroad Avenue since 1997, has created a straightforward method to learn and play the piano instantly. [Read Full Article]

Sonny's PianoTV Show is the first "piano & wellness" variety TV show on the internet, cable, or network TV. Informative and entertaining, this completely original video show plays 24/7 at SonnysPianoTV.com. Created, produced and hosted by Sonny Dante Stancarone, the goal of the show is to encourage everyone to play piano for the health, well being and stress management benefits that piano playing has to offer.... [Read full press release]

Ever since he was a little boy, Sonny Dante Stancarone has believed in starting anew.

As a youngster, the Franklin Square native was afflicted with severe asthma. A combination of breathing and relaxation techniques brought him back to the point where he became a star athlete – after 30 years he still holds the Carey High School record for the half-mile – and eventually attended Adelphi University on a full athletic scholarship.

The Next Generation in Websites has Arrived!

SonnysPianoTV.com breaks new ground creating internet TV Shows and all-video marketing websites for the business community. Based on his success selling pianos and DVD's through his own internet Piano TV Show and video marketing website Sonny of Sonny's Pianos Inc. has developed YourTVWebsites.com which offers everyone the opportunity to have their own customized internet TV show website to promote their products, services and talents directly to the world wide internet audience.... [Read full press release]